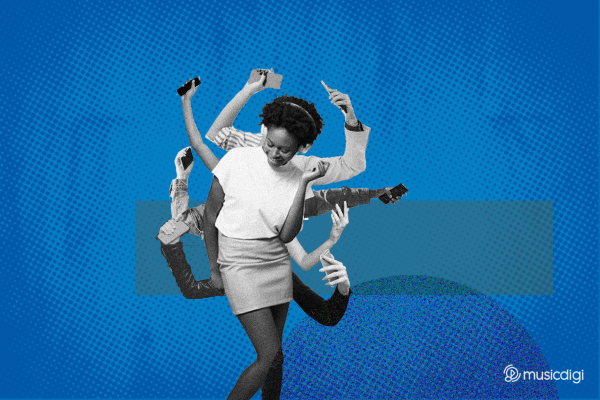 Now a days anyone who goes to an event takes at least on picture or video while they’re there, no more ‘living in the moment’. However this can be very beneficial to you as an artist, so how can you get fans to take more photos when they’re at your gig? The suggestions below are great ways to get fans in take photos when they attend your gigs.

Set up a competition for the audience to enter while they’re watching you perform. I previously went to a gig where one of the bands performing got audience members to take a photo of them and tagged them (the band) in it. The person who took the best photo, decided by the band, got a bundle of merchandise and the band got a tagged in a load of photos that a large number of people would see. Things like this are a win for fans and you as an artist!

Gigs and concerts are great fun for everyone to enjoy but why not make it extra special by creating a moment you know people will want to capture. This could be a big announcement, bringing a fan on stage or even another artist. Unexpected appearances always please crowds, I attended a James Bay gig locally and he brought Ed Sheeran on stage half way through his set which sent everyone into a frenzy! A moment like that will be remembered for a long time and is likely to gain a lot of attention from fans, and even the media.

When you’re on stage performing make sure you take some time out to pose! There’s nothing worse than trying to get a good picture at a gig/concert but the artists won’t stop dancing around the stage. Slow it down and stay still for a bit so fans can get some good snaps, also take a bow once your set has finished and get the rest of your band with you.

If you want people to take pictures at your gig create a post on your social profiles informing your fans you want them to get their cameras out. Just be straight up and say you’re looking for good pictures from any gigs you’re performing which will make your fans take better pictures and make them more likely to upload them after your show. Also, if you’re using pictures taken by fans and crediting them other people are likely to share photos with you giving you way more to choose from.

Photo booths are always a fun and easy way to get fans to take pictures when attending your gigs. The downside is you most likely won’t be in the photos but you can always plaster your logo/brand in the photo booth for people to see. Also, any fans that upload the photos are likely to tag you in their post and add hashtags of the event.

The most simple suggestion of all, just ask fans to take photos of you and your gig in general. When you’re performing mention it between songs that you like seeing photos by fans from your gigs and encourage people to fill up their camera roll and upload the photos after. You don’t need to plead with your fans, after all they’ve come to see you so they will most likely be taking photos/videos anyway. Just mention you like to see what people captured while watching you perform.

All of the above suggestions are great, and easy, ways to get people to take more photos when watching any of your shows. The more photos taken means the more likely people will tag, hashtag and mention you when uploading them for all of their friends and families to see.

Ready to get your music outthere? Sign Up to MusicDigi to release your music to all the major music stores and streaming platforms.