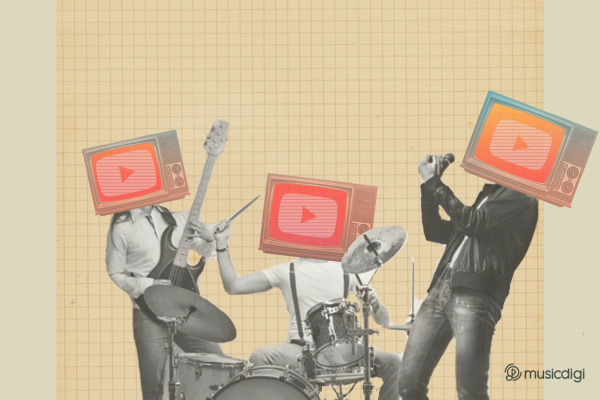 Reaching over a billion users each month YouTube has undeniably become one of the most important tools with which artists engage both preexisting and potential fans, but in order to effectively monetize this engagement, a certain procedure must be followed.

There are basically three types of monetisation on YouTube, two of which are only available via digital aggregators like MusicDigi. On the one hand there is YouTube's Content ID, which lets you monetise videos that use your music, and on the other hand is the new streaming service, Music Key. The third option, which you can do yourself, is to become a YouTube partner. With that option you can only monetise videos that you upload to your own channel. As there is often some confusion about the merits of each option, we’d like to take this opportunity explain what each service can do for you.
YouTube Content ID
YouTube Content ID is the system, first rolled out in 2008 and extended to music in 2010, through which rightsholders are able to upload their content to a database that YouTube then uses to match against works uploaded to the site by third-party users. When the system detects a match, the rightsholder can then choose what to do with it, including simply tracking the content, monetizing the claim or, if desired, blocking the video outright. For artists who rack up huge play counts, monetization could add up to a meaningful revenue stream. Other artists will focus on using Content ID solely to prevent infringing content from appearing on YouTube, encouraging their fans to listen in ways that are more remunerative.

All revenue generated via YouTube Content ID comes from advertising. Ads are served to videos based on availability and with an algorithm that measures each viewer’s ad saturation. This means that whenever one viewer watches multiple monetised videos after another, ads won’t be served every time he or she views a video, as YouTube doesn’t want to deter viewers by overloading them with ads. Also, as most ads are bought on a bidding basis, prices for those ads vary based on availability.
In December, for instance, ads are sold at considerably higher rates due to high demand by advertisers leading up to Christmas, as Christmas sales are vital to the survival of many businesses. Furthermore, the types of ads shown on your videos vary on how the video is categorised, as ads are served targeted on the content of the video and the preferences of the viewer. Additionally, the amount of money you get paid also depends on the ad format. Banners (display ads), for example, are much cheaper than non-skippable video ads.
YouTube Red

YouTube Red, originally launches as YouTube Music Key is YouTube’s paid subscription service, currently only available in select countries. Your songs, metadata, and album cover are delivered to YouTube like any other streaming service. From that data, YouTube generates static videos and album playlists, and, in most cases, so-called artist topics. If YouTube Red finds an official video of a Song on your channel, it displays that instead of its own static version.

YouTube Red has a free tier, which essentially includes all “official” music videos on YouTube, and this part works in the same way that Content ID monetisation works with the important difference that only that one specific video is monetised. No reference file is added that claims any other videos. Additionally, the videos that are integrated into YouTube Red receive revenue from paid subscribers. The per-stream payout amount for  YouTube Red royalties are strongly competitive with Apple Music and Spotify.

You can sign your channel up to be partnered with YouTube. Additionally, you’ll need to verify your channel and open an AdSense account. With this option you let YouTube place ads on your videos and receive a part of the revenue. You just upload your videos, and if they meet the criteria, you select them for monetisation, and that’s all you have to do. However, unlike Content ID monetisation, this option will only work for your channel, while Content ID scours all of YouTube for any videos that may contain your music and places ads on those videos so that you may benefit when others use your work.

We suggest you put your catalogue on the world’s most popular video site. If you don’t, someone else will probably upload it. And that’s where YouTube Content ID becomes most useful. You’ll earn the same when you upload your music on your own channel and when someone uploads it without your permission.

If you haven’t already, you can get music on YouTube Music through MusicDigi.